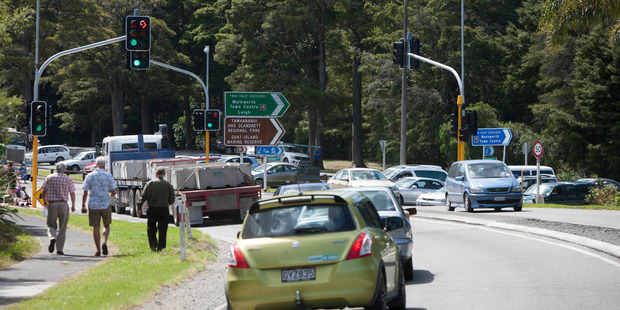 If there is one part of Auckland that embodies everything wrong with the Auckland Council, the State Highway 1 intersection with Hill St at Warkworth would be it.

The intersection is a microcosm of Greater Auckland - the spaghetti junction of Warkworth with a state highway dissecting two arterial roads, two local roads, and the high street flanked by two schools, two popular reserves, sportsgrounds, and the central business district.

Despite queues backing up kilometres in all directions, even at non-peak times, central and local government politicians and bureaucrats have obfuscated for decades to find a practical solution.

Before Rodney District Council was merged into the Super City, the council collected millions from developers' financial contributions to address the increased traffic from subdivisions in Omaha, Point Wells, Matakana and Snells Beach, all converging on the intersection. The Auckland Council inherited that money and now no one can explain where it is.

Auckland Transport, now responsible for maintaining the intersection, is a behemoth of planners and engineers " a revolving door of staff with many of the largest consultancies " whose ideological cliques tussle at the ratepayers' expense. I have never come across so many people going to so much effort to do as little as possible.

At a recent "consultation" meeting held in Warkworth, a team of NZ Transport Agency and Auckland Transport "frontline staff" showcased their "big picture" projects to solve the congestion through Warkworth. Among all the fluffy language, flowcharts and nondescript maps, their plans were the extension of the Northern Motorway from Puhoi to north of Warkworth, a local western bypass, and a new road linking State Highway 1 to Matakana Rd.

Construction of the motorway extension hasn't started and won't be completed until at least 2022.

The proposed bypasses and link roads around Warkworth haven't been budgeted for or land secured. In fact, after five years of delays since being floated, the only thing Auckland Transport has to show are dotted lines on a theoretical map.

Ask any politician or official what they will do about the intersection, and they will say "the bypasses will fix it".

Fix it? Not only will the intersection congestion get worse over the next 10-plus years while the bypasses are being built but, when they are complete, the same design flaws of the intersection will remain.

What doesn't help is that teams inside Auckland Transport compete over prioritising projects and ideologies. There are the technocrats who prefer traffic lights, the 'think big' motorways team, and the train of thought that if the roads are gridlocked, people might take alternative transport.

This doesn't help anyone travelling through Warkworth.

The local and central government politicians " indoctrinated by officials inside the bubble of the council's meeting culture " are ineffective to do anything.

Politicians are oblivious. John Campbell did a puff piece on John Key holidaying at one of his baches in Omaha. Visiting the Matakana Farmers Market for a meet-and-greet, a retired local shook Key's hand and sternly said: "I have a message: fix the Hill St intersection", to which Key just smiled uneasily.

I showed the intersection to several traffic engineers from throughout the country. They were unanimous that a double roundabout would provide a logical layout, maintain a consistent flow and minimise queues. Such a design has successfully worked in Tauranga, Napier, and Porirua. To them, it was a no-brainer.

The benefits of roundabouts are well known. Instead of looking forward, left and right, drivers at roundabouts only have to look and give way to their right. Traffic leaving a roundabout allows other traffic on, allowing for different peak flows for each connecting road. More importantly, the layout is more logical, allows multiple roads to connect, and is cheaper to maintain than traffic lights.

I have been told that the cost of fixing the intersection could be less than the financial contributions collected from three of the 1000-plus new Omaha properties.

It is diabolical that a government's priority is to spend more than $1 billion on a 10-year project bypassing the problem rather than spend less than $100,000 on the more immediate problem of congestion at a confusing intersection.

But Auckland Transport has delusions of grandeur. So focused on the big projects of the future, they can't see the most obvious smaller problems directly in front of them.

The most concerning issue is that the amount spent on planners to draw the dotted line around Warkworth is more than what other councils would spend to build what the engineers I approached recommended.

Think about that when you are next sitting in a traffic queue at Warkworth.